skip to main | skip to sidebar

This passage from a long article by James Meek in the LRB about the London Underground curiously echoes some of the themes of Three Men. Or perhaps it's not so curious, as James and I were at school together in Broughty Ferry - maybe, in some subterranean manner, this gave us overlapping imaginative interests. Occasionally. Perhaps. Whichever, I trust this taster will send you to the LRB for the whole article - it's brilliantly written and researched, and highly recommended.

"One winter in the early 1990s I took an overnight train from Georgia to Yerevan, the capital of Armenia. There were no planes: Armenia was at war with its neighbour Azerbaijan, and under blockade. Snow came through the ill-fitting windows of the sleeper as it trundled between steep little peaks. When we arrived in Yerevan the next morning it was still dark: the moon had set, and the city, starved of electricity, was blacked out. Only sparse dabs of kerosene light and the occasional brace of headlights showed a city was there at all.

Robert, an Armenian PE teacher who had befriended me in the coupé, took me through the frosty murk of Yerevan’s central station and into a doorway. In an instant there was light, power, a swift transaction involving tokens, a set of escalators, and at their foot, the familiar declining whine of a clean, brightly lit underground train. We got in; the carriage was full of neatly dressed Armenians who were, in spite of everything, going somewhere – commuting. We travelled two stops, to the centre of town. I experienced the disorientating sense that the entire urban planet was connected by a single network of underground railways, functioning as a dependable back-up world rumbling away below, eternal and unchanging, whatever chaos reigned on the surface. Then we got out and climbed to the street, where there was still no power. Robert took me by the arm in the pitch darkness and led me, like a blind man, to a hotel.

Like all Soviet-era metro systems – most big cities had them – Yerevan’s is patterned on the one in Moscow, which owes much, in turn, to the London Underground. Frank Pick, one of the guiding geniuses of the glory days of the Tube between the wars, was given a medal by Stalin in 1932 (although he did not, as Wolmar romantically suggests, meet the dictator in person). When work began on the Moscow metro in 1931, it was with the possibility of
cities being attacked from the air, and of citizens finding not merely shelter underground but a whole lit-up, powered, alternative, subterranean city, invulnerable to bombs. The use of the London Underground as an air-raid shelter in the Second World War has become part of Britons’ mental slide show of the Blitz. Although few Londoners used it – 4 per cent, Wolmar reckons – some slept on Tube station platforms every night for three years, nourished by tea and buns delivered in refreshment trains, which each evening hauled tons of food around the network.

It was still earlier that London’s Underground turned from being a mere means of transport into a skeleton city-in-reserve beneath the earth’s skin. Londoners began to seek shelter in the Tube in earnest after the Zeppelin raids in 1915, and after 1917, when German bombers struck heavily, citizens poured into the 86 stations which the Underground, then privately owned, made available. At one point in 1918 some 300,000 Londoners took shelter there, when there was supposed to be room for only 250,000. During the First World War, passenger numbers on the Underground went up by two-thirds. From 1914, Tube advertising played to people’s fears. ‘It is bomb proof down below,’ one ad read. ‘Underground for safety; plenty of bright trains, business as usual.’ Another read like a sinister piece of verse:

Never mind the dark and dangerous streets
Underground
It is warm and bright
Be comfortable in well-lit trains and read the latest war news.

Two decades earlier, there had been a different attitude towards the world of the Underground. In The Time Machine (1895), H.G. Wells portrayed the beautiful, degenerate, soft-headed heirs of the aristocracy frolicking in the sunlight, prey, on dark nights, to the cannibalistic attentions of an underground-dwelling industrial proletariat. ‘There is a tendency to utilise underground space for the less ornamental purposes of civilisation; there is the Metropolitan Railway in London, for instance,’ Wells’s narrator says. ‘In the end, above ground you must have the Haves, pursuing pleasure and comfort and beauty, and below ground the Have-nots, the Workers getting continually adapted to the conditions of their labour.’"
Posted by Bill Herbert at 23:33 1 comment:

PN Review us plus...

Looks like PN Review have published a review of 3 Men by N.S. Thompson here. Those of you with online subscriptions to PNR will be able to read the whole thing. Those of us with nonesuch will wait quietly on one of the great seats from Novokuznetskaya. 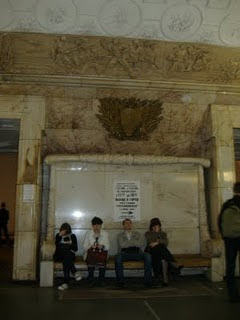 We (OK, I) still await (am still awaiting) detailed reports from the dva brodyagi, but Andy has divulged that, among others, they spoke to/gave copies to Manu Durand, the editor at Paulsen; Vavara Gornostaeva, the editor at Corpus, and Alexandr Livergant, the editor-in-chief at the prestigious journal Inostrannaya Literaturna (Foreign Literature). So far the latter journal has got in touch to say they’d be interested in publishing us, possibly in 2012. More on this bomb/egg/sea shell soon.

In other news, the NCLA (in association with British Council) are hosting a reading by three prominent Russian poets including the legendary Lev Rubinstein. He will be reading with Dmitry Kuzmin and Maria Stepanova in Culture Lab on the 14th of April. It is hoped that at some point we can get all three of them on the Newcastle metro.

Get your tickets here for this (surely unmissable) event.
Posted by Bill Herbert at 17:43 No comments:

The next outing for the gesamtkunstwerk that is our live version with audiovisual accompaniment of Three Men is January 18th at the Electric Kool Aid Cabaret of the Spoken Word held at Blu(what used to be Blaises) in Middlesbrough. More details soon.

My colleagues of the underground, Andy Croft and Paul Summers, are currently back in Moscow contacting translators and publishers for the next stage of the Myetro project: its possible appearance in Russian. Either that or they've gone to the Canary Islands and haven't tweeted me.

They've chosen to go at a time when the weather in the North East so closely resembles that of Moscow (give or take 10 degrees) that they don't have to change their outfits. (It's not clear that Andy actually can change out of that bloody jacket.)

No doubt we'll have news on this latest trip soon enough or indeed slightly later. In the meantime, the stubborn refusal of the squirrel meme to hibernate means that the stanza on the possibly-not-entirely-real station for the possibly-not entirely-there 'Squirrel Hills' demanded a successor:

Bronze panels show in Belichiy Gory
the war between the Greys and Reds --
Yeltsin's high station tells the story
that left ten million squirrels dead.
One side were Celto-Scythian rebels,
the others sleepless, alien devils:
Prince Nutkin, Tuftsky, Sasha Cheeks,
Tsar Timfy Tiptoes -- through these peaks
from birch-top fought to floor of forest,
while Greys made famine from Red's glut,
for every tree, each twig, each nut.
Why was this iconised by Boris?
While oligarchic fat cats feast,
democracy is for the beasts.

As real as Hollywood’s Ninotchka,
this station is an empty hoard
of bottles drunk by a red belochka –
stare all you want, they’ll still stay blurred.
A six foot squirrel, stark and raving
that none can see but those, half-shaven,
half-drunk, who wake in hotel rooms,
in snowdrifts, metros, Lenin’s tomb.
It tells you fables from an era
when men pissed vodka, wives shat eggs
and flies had four delicious legs.
It whispers, ‘You’re the true chimera,
a beast that thinks he knows he thinks?
No wonder wanderers turn to drink!’
Posted by Bill Herbert at 13:50 No comments:

This was the first reading for a while to involve all three of us, and the first time we'd tried the full-on AV son et lumiere spectacular version of 3 Men ie, we included a slideshow and some MP3s, so thanks enormously to Colin Brown and Poetry Can for the opportunity.

This meant we could focus on set-list, edit some of the mass of materials the project had accumulated, and think a little about the mechanics of performing a number of quite short poems while three people stand in a line on stage. We didn't get all that all right, but it felt like a considerable step forward.

Here are the files used:


So now, if you want to recreate the reading experience in the comfort of your own treehouse, all you need is the setlist and to hit the 'play' buttons at the right moment. But I'm assuming no-one would be that bonkers.
Posted by Bill Herbert at 13:41 No comments:

I've been meaning to write something about the terrible bombings in the Moscow Metro back in March, and have been carrying fragments of a phrase or two around with me for a while -- if the image isn't too repellent, sometimes an inspiration feels like putting together something that arrives in bits and pieces, the imagination as the opposite of a bomb. Anyway, thinking about that tragedy and its origins in another tragedy, this is the stanza that eventually came:

Kultury is twelve marble roundels
displayed along a Metro wall.
Kultury is nails bagged in bundles
explosive pressed into a ball.
Kultury’s skaters, tennis players;
Kultury’s martyrs, random slayers.
Kultury is a model plane,
a future freed from debt and shame.
Kultury is a mushroom hunter
slaughtered in the forest snow:
it's what we can't and so must know.
It is our brief reply to winter:
a warm breath’s disc in a window’s frost;
ice-hole to rivers of the lost.
Posted by Bill Herbert at 18:27 No comments:

Email ThisBlogThis!Share to TwitterShare to FacebookShare to Pinterest
Labels: bombs in the Moscow Metro, Park Kultury

Three Men in a Poetry Can

Our next gig is a three person show at the Bristol Poetry Festival. Their poster seems to have been very kindly designed with us in mind: 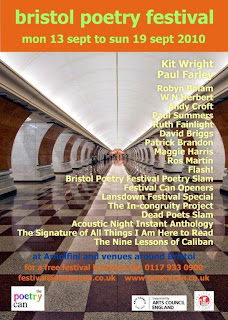 We are on as follows:

The link for the whole festival is here. It all looks very exciting, with Farley and Fainlight headlining -- 'The Nine Lessons of Caliban' is a particularly intriguing title -- perhaps I can finally learn something...
Posted by Bill Herbert at 12:21 No comments:

The Morning Star has printed a good review by Steve Andrew of the book, in which he also gives a generous mensh to this very site -- thanks for that, and welcome New & Curious Visitor!

The next 3 Men reading will be a two man version on Tuesday Feb 16th at the Flying Goose Cafe, Beeston, details here. The two men in question will by Andy and Bill.
Posted by Bill Herbert at 13:26 No comments:

Ehm on the Metro 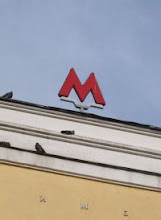 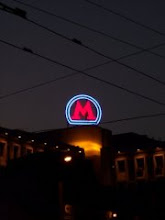 Newcastle Centre for the Literary Arts

Promote your Page too